The aim of this tutorial is to demonstrate the use of compartmental modelling and simulation in Berkeley Madonna in predicting the receptor occupancy time profile in a body tissue after intravenous administration of a receptor ligand. In this tutorial, the selective dopamine D2 antagonist raclopride is used as an example. The pharmacokinetics (PK) and dopamine D2 receptor occupancy (RO) in brain after intravenous administration of raclopride to rat are simulated. 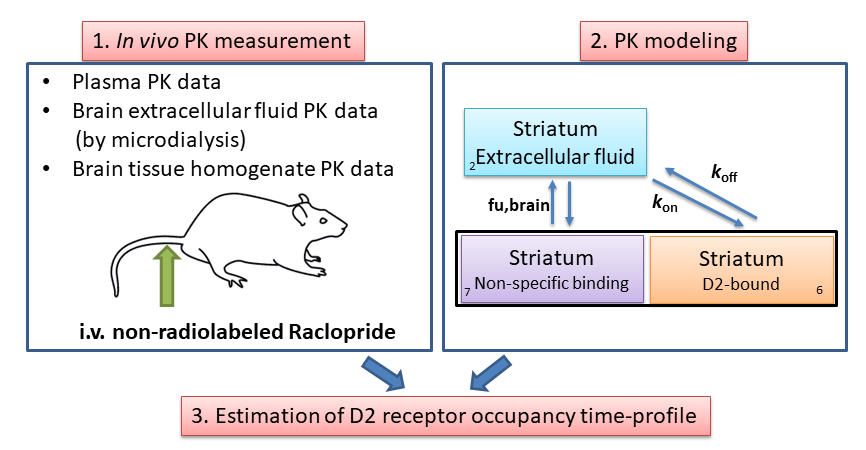 Input script used in the tutorial

Download the Berkeley Madonna code required for this tutorial here

In our raclopride example, the PK data in plasma and brain (target tissue) were obtained from an in vivo PK experiment in rat.

Step 2: Designing the structure of the compartmental PK model 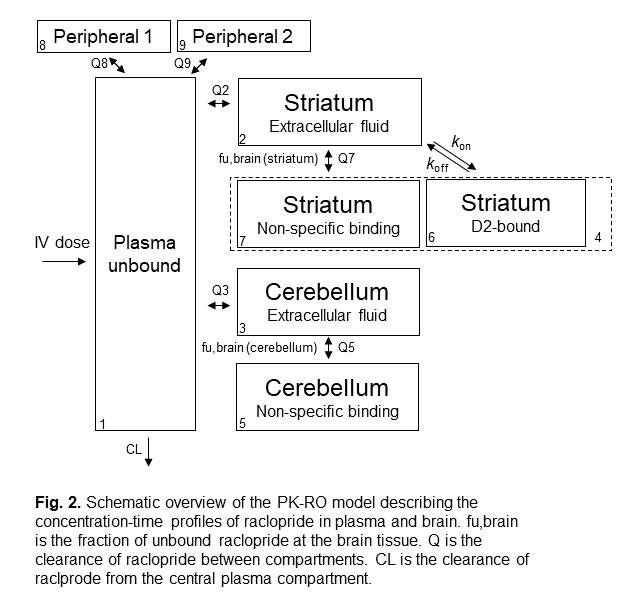 Step 3: Drafting the differential equations of the compartmental PK model

where K12 and K21 are the first-order clearance rate of the ligand from compartment 1 to 2 and from 2 to 1, respectively.

Step 4: Estimating the PK-related parameters of the compartmental PK model

In our raclopride example, a population PK analysis was performed using a non-linear mixed effects modeling approach, which estimates the typical (mean) value of model parameters as well as their inter-individual variances using the software NONMEM® (version 7.3.0, ICON). There are other non-linear mixed effects modeling software such as Monolix (Lixoft) and Phoenix NLME (Certara). While all the above software require a paid license, there are also packages in R that are free, for example nlmeODE .

There are two possible approaches, depending on the binding kinetics data we have:

1. if we only have the equilibrium affinity constant (Kd) data, then we can use the equation shown in the figure 3:

When ligand concentration is equal to Kd, then receptor occupancy is 50%. 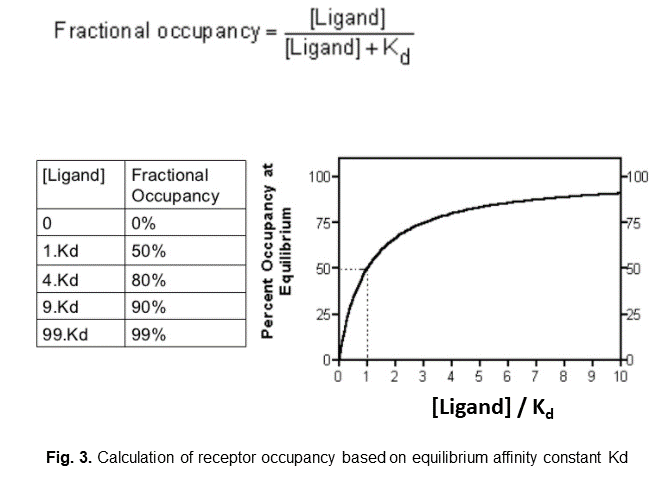 (assumption: the ligand-receptor binding is a one-step process)

“LR complex amount” is the amount of ligand-receptor complex;

[ligand] is the concentration of free ligand at the tissue.

Receptor occupancy is then calculated as:

Step 6: Perform simulation to simulate the PK and receptor occupancy-time profiles at the target tissue

To generate a simulation, input the desired dosing information such as:

IV dose of raclopride: in the example it is “doseperkg = 6” which means a raclopride dose of 6 nmol/kg of body weight of the rat

IV infusion time: the duration of the IV infusion. If it is a bolus injection as in the example, then we set the infusion time to a small value, e.g. “infusetime = 0.1” (0.1 min)

Once the dosing information is set, press “Run”.

Simulated amount-time profiles in different compartments will be generated in a new plot. (as mentioned in Step 3, the differential equations in the model describe the change in the amount (not concentration) of the ligand. Therefore, the default simulation plot displays the amount of ligand instead of concentration of ligand)

Press “Run” again to generate a new plot which displays the selected variables. 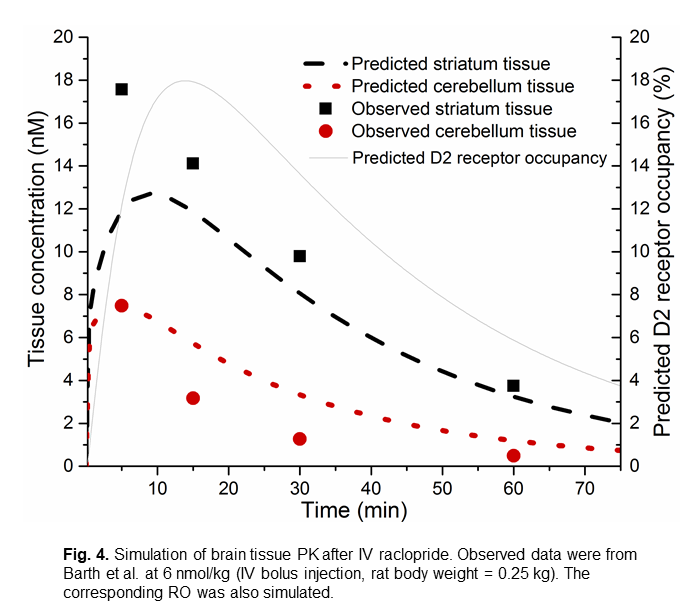 Step 7: Extra: Performing simulation to investigate the impact of different parameters on the PK / RO outcomes

The Berkeley Madonna software allows easy visualization of the change in PK-RO profile when a parameter of the model changes.

At the “Parameters” tab, select “Define Sliders”. Then you can select the parameters and the corresponding range of the values that you would like to test. A box of sliders will appear. When you change the value of a parameter using the slider, the simulation plot will be updated. You can use it to simulate the change PK-RO profile when the condition changes. For example: