This tutorial guides the user through the process of setting up and running COMparative BINding Energy (COMBINE) analysis to derive a Quantitative Structure-Kinetics Relationship (QSKR) for the dissociation rate constants (koff) of inhibitors of a drug target. The procedure is demonstrated for a dataset of 70 inhibitors of heat shock protein 90 (HSP90) belonging to 11 different chemical classes. The tutorial will follow the procedure described in the paper:  Gaurav K. Ganotra & Rebecca C. Wade, ACS Medicinal Chemistry Letters 2018, but with much simplification.

A similar version of this tutorial, with more details, can be found in the book chapter: Ganotra G.K., Nunes-Alves A., Wade R.C. (2021) A Protocol to Use Comparative Binding Energy Analysis to Estimate Drug-Target Residence Time. In: Ballante F. (eds) Protein-Ligand Interactions and Drug Design. Methods in Molecular Biology, vol 2266. Humana, New York, NY.

Drug-binding kinetics, i.e. the rates at which a drug associates with (kon) and dissociates from (koff) the active site of its macromolecular target, constitute important early stage parameters for predicting the overall pharmacological effects of a drug in vivo. There has been growing consensus that optimizing the affinity alone under equilibrium conditions does not essentially translate into higher potency in vivo and instead the kinetic parameters (kon and koff) should be optimized to ensure better efficacy. Therefore, robust and high-throughput in silico methods are needed to predict kinetic parameters and mechanistic determinants of drug-protein binding. With the continual increase in the amount of measured experimental data on drug-binding kinetics and the number of crystallographic structures of ligand-receptor complexes resolved, approaches to derive 3D Quantitative-Structure-Kinetics relationships (QSKRs) offer considerable potential for predicting kinetic rate constants for new compounds. COMparative BINding Energy (COMBINE) analysis is one such approach. It can be used to derive a target-specific scoring function to compute binding free energy, drug-binding kinetics or a related property by exploiting the information contained in the 3D structures of receptor-ligand complexes.

In COMBINE analysis, energy-minimized structures of protein-ligand complexes are used to compute protein-ligand interaction energies using a molecular mechanics force field. These energies are then partitioned and subjected to regression based methods such as Partial Least Squares (PLS) regression, to derive a statistical model which relates the predicted quantity to weighted selected components of the drug-receptor interaction energy. The interaction energy components are typically Lennard-Jones and Coulombic terms from a standard force field, decomposed on a per residue basis. If a sufficiently large number of molecules with known activities and 3D structures of ligand-receptor structures for these molecules are used in the training set, the weights of these interaction energy terms can be estimated by linear fitting. Due to the rather large number of interaction terms used in the linear fitting,  standard multiple regression techniques are not employed;  instead, partial least squares (PLS) analysis is applied to perform statistical analysis to determine the weights and the error coefficient C.

To perform COMBINE analysis, an energy matrix is generated where the columns represent each of these interaction energy terms (independent variables) and rows correspond to each ligand in the training set. The inhibitory activities or kinetics (dependent variable) of these ligands are added to the final column in the matrix. Then, the PLS method is used to maximize the linear correlation between the independent and the dependent variables by performing rotations of this matrix in the latent variables (LV) or the Principal Components (PC) space. In order to exclude energy terms that do not contribute to binding from the QSAR/QSKR, a variable selection procedure can be carried out. The variable selection procedure involves evaluation of the effects of each independent variable on the model predictivity and may be carried out iteratively using a combination of D-optimal and fractional factorial designs. However, in this work, instead of this variable selection procedure, we have used a pre-screening procedure where only those interaction energy terms that have standard deviation above a specified threshhold value were selected for PLS regression and the rest of the energy terms, showing little or no variance across the training dataset, were eliminated from statistical analysis. The main advantages of correlating inhibitory activity or kinetics (∆G, KD, koff , kon, pKi , pIC50 etc.) with residual interaction energy components over simply correlating with total computed binding energy is that the resultant COMBINE analysis model can help to highlight key interactions that are important to explain the observed variances in the biological activity. This information may also help in providing insights for predicting the effects of point mutations in proteins and for designing compounds with improved binding properties.

The source files for gCOMBINE can be downloaded from here

You can download all the data and input files needed to run this tutorial as a .ZIP file from the Supporting information of Gaurav K. Ganotra & Rebecca C. Wade, ACS Medicinal Chemistry Letters 2018.  (ml8b00397_si_002.zip (20.17 MB))

Type the following command to extract ml8b00397_si_002.zip into a directory called /home/combine/

Description of the scripts and input files used during this tutorial

Preparation of the protein and ligand structures

Generation of the topology and coordinate files for protein and ligand

tleap_ligand_in  - tleap input file for generation of the ligand parameters

Step 1:  Preparation of the protein and ligand structures

Protonate the ligand using PyMOL and save it as ligand_H.pdb; then remove all connectivity lines in the file.

Use parmchk from Amber tools to determine the bond and atom types of the ligand (file INH.frcmod):

Combine the protein and ligand PDB files into one file in which their coordinates are separated by TER lines:

The energy minimization procedure consists of four steps:  first with restraints on all protein and ligand heavy atoms (with force constants of 500, 50, and 5 kcal/mol A2) and then without restraints. The input files are prepared using the amber_prep.sh script and minimization is performed using the PMEMD module of Amber. Run the amber_prep.sh script through the command line as:

The output coordinate file ref-min.crd will be used as an input for performing the COMBINE analysis as it contains the coordinates for the Amber minimized complex.

Follow the above steps 1 to 3 for all the protein-ligand complexes to be used for performing COMBINE analysis.

You can download all the data and input files needed to run this tutorial as a .ZIP file from the Supporting information of Gaurav K. Ganotra & Rebecca C. Wade, ACS Medicinal Chemistry Letters 2018.  (ml8b00397_si_002.zip (20.17 MB))

Type the following command to extract ml8b00397_si_002.zip into a directory called /home/combine/

The above command will generate the following 5 files in the directory: /home/combine/supplementary_files/

For the subsequent steps, we will only be using the already prepared AMBER topology (hsp90_amber_topology_files.zip) and coordinate (hsp90_amber_coordinate_files.zip) files for energy-minimized 70 HSP90-inhibitor complexes.

Step 5:  Copy Amber topology (.top) and coordinate (.crd) files for all energy-minimized complexes into a directory

Extract topology and coordinate files for all the 70 energy-minimized complexes in /home/combine/ directory.

Then create an empty directory to perform COMBINE analysis and copy all the topology and coordinate files to this directory.

The source files for gCOMBINE (gCOMBINE.zip) can be downloaded from here

Type the following command to extract gCOMBINE.zip in a directory called /home/combine/

Note: Do not forget to change the permissions to allow the user to read and execute the files/programs in the gCOMBINE directory and its underlying subdirectories by:

Move to the run_combine directory:

Copy the input file for COMBINE (input_combine) to the run_combine directory:

Click on Load Parameters and open the input file (input_combine).

The input file consists of information such as a list of input parameters used for running COMBINE analysis, file names of topology and coordinate files of complexes to be used, pharmacological activities (log(koff) values in our case) of ligands, information on whether the complex is part of training dataset or test dataset etc. The 'file-format' for the standalone COMBINE input file is specific to the gCOMBINE program. In this tutorial, we are using the list of parameters that were optimized for this model. However, the user has the option to modify the input parameters for COMBINE analysis in the gCOMBINE interface to be specific for their system/activity of interest, and can save a valid standalone COMBINE input file using the Save Parameters button. For information on the list of different options/parameters (such as data scrambling, Scaling of variables, Number of Latent variables, Electrostatic models, External variables, Treatment of positive energies etc.) that are available for COMBINE, please refer to the documentation of the gCOMBINE program. 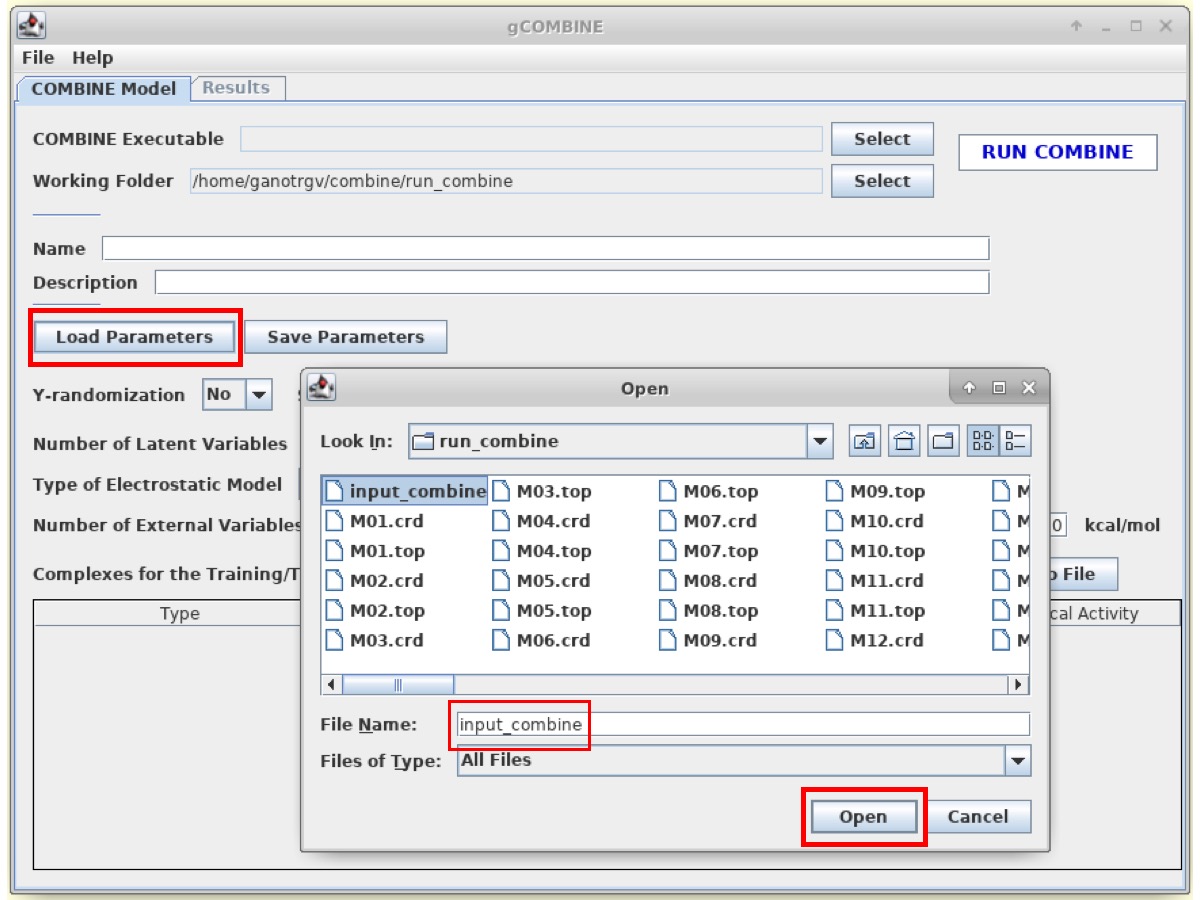 Now, enter the path of the COMBINE Executable to /home/combine/gCOMBINE/bin/linux/combine.exe

The user can also define the name for the model and its brief description. However, this step is OPTIONAL. 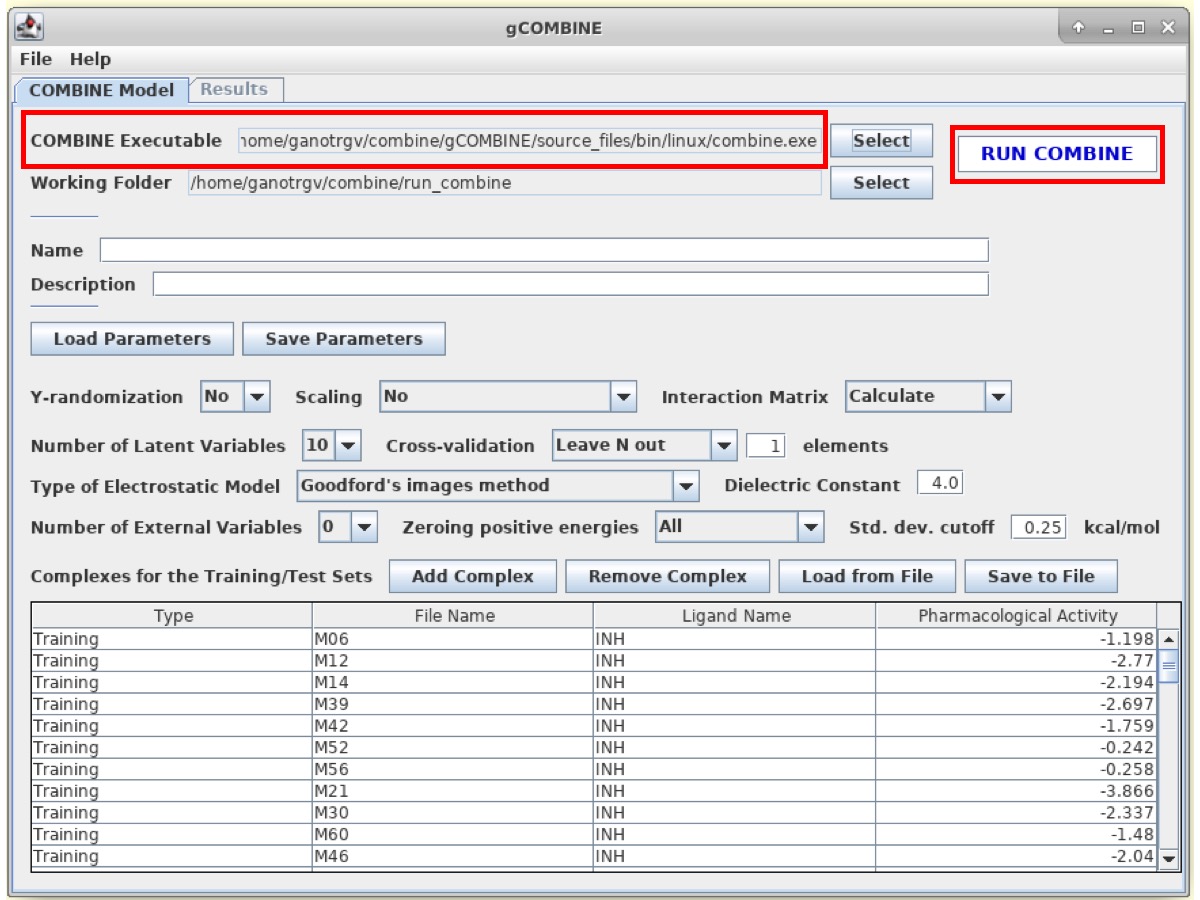 The results for COMBINE analysis can be visualized under the Results tab at the top.

gCOMBINE provides a summary for each principal component (latent variable) with the values for the correlation coefficients on both training and test datasets (if provided), and the errors (root mean squared error, average absolute error) between predicted and experimental values on training and test datasets (if provided). This summary is presented in a table and is also graphically displayed in a plot. 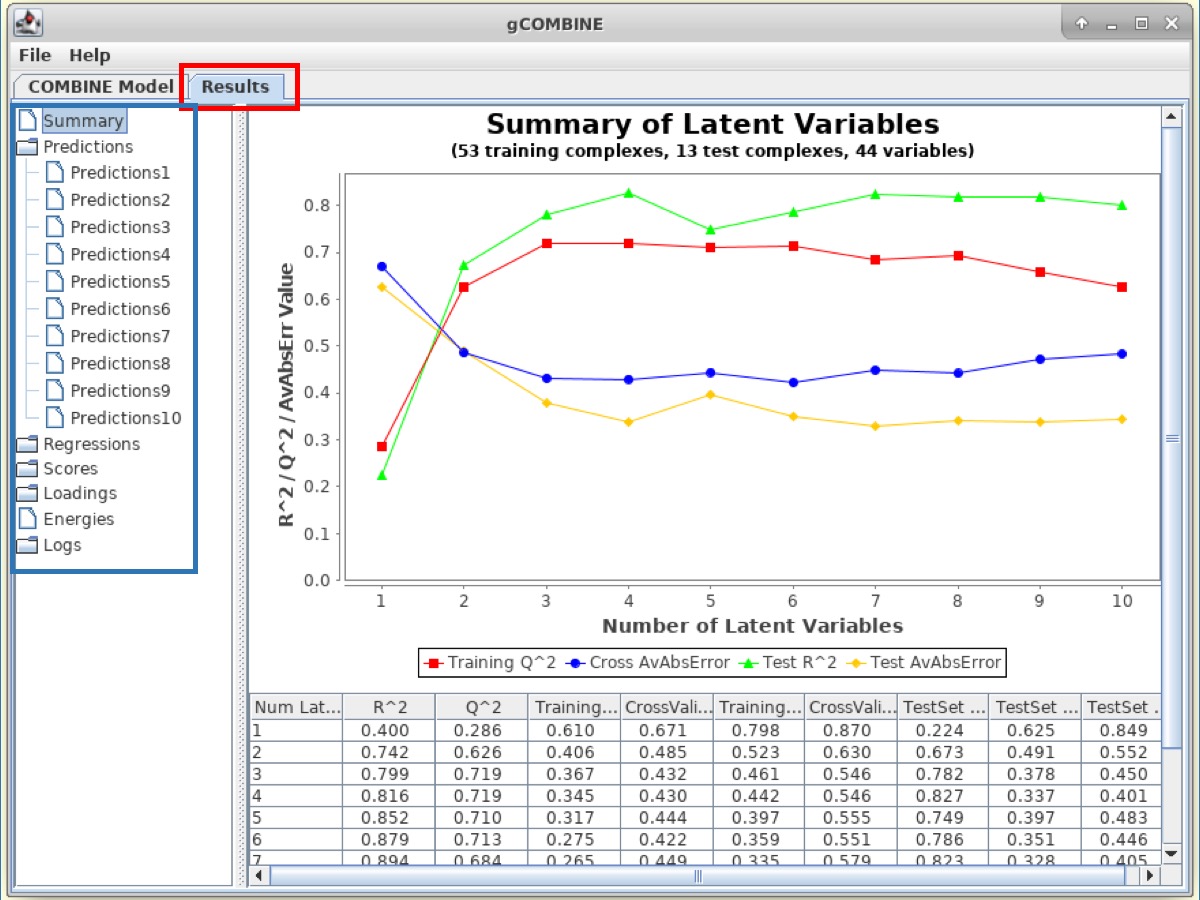 In the panel on the left-side of the Results window, there are several Buttons which display additional information such as:

3. Scores  This section displays plots of the complexes in the space defined by two successive latent variables (score plot). The values of the scores can be understood as the values of the compound in the new variable space, the principal component space, and since this new space is normalized with zero mean, compounds lying far from the origin have values significantly deviating from the mean, and may therefore be outliers. 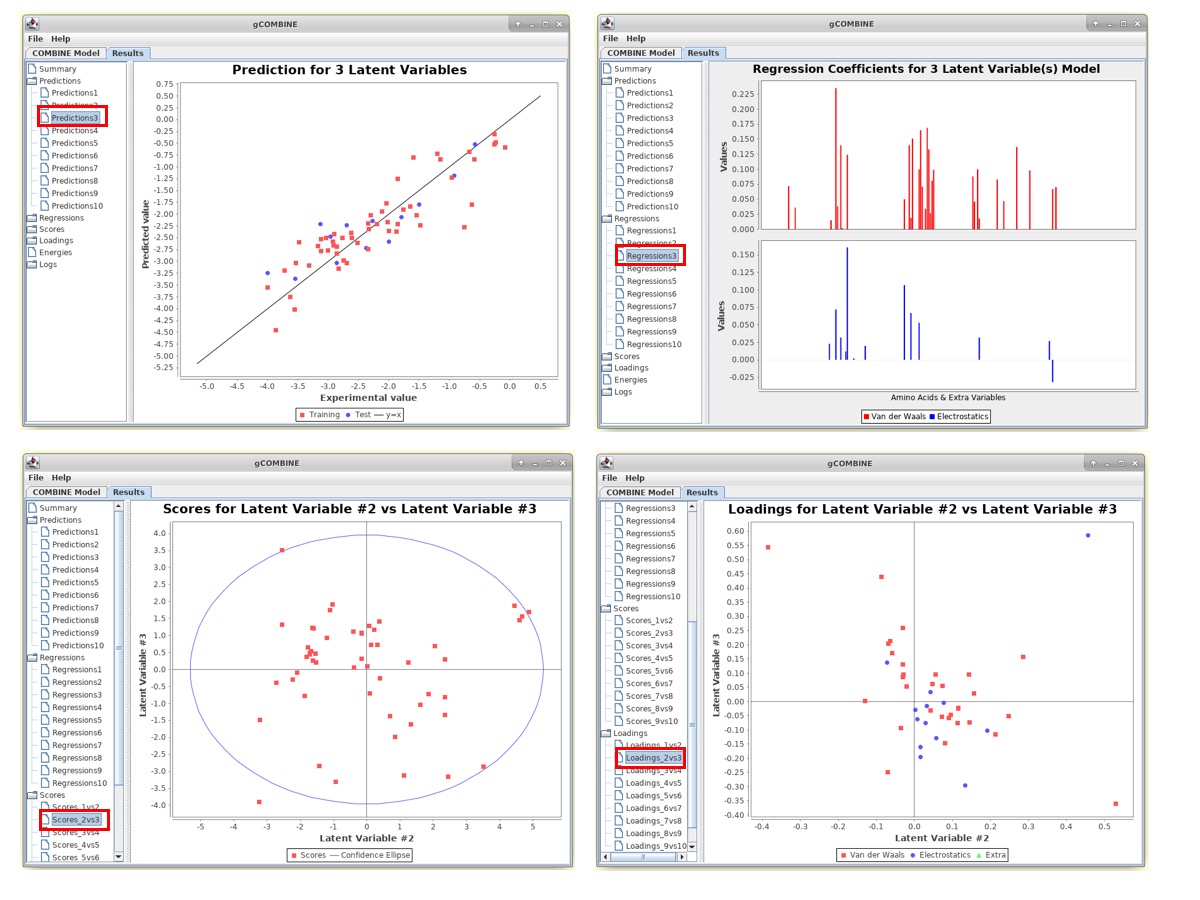 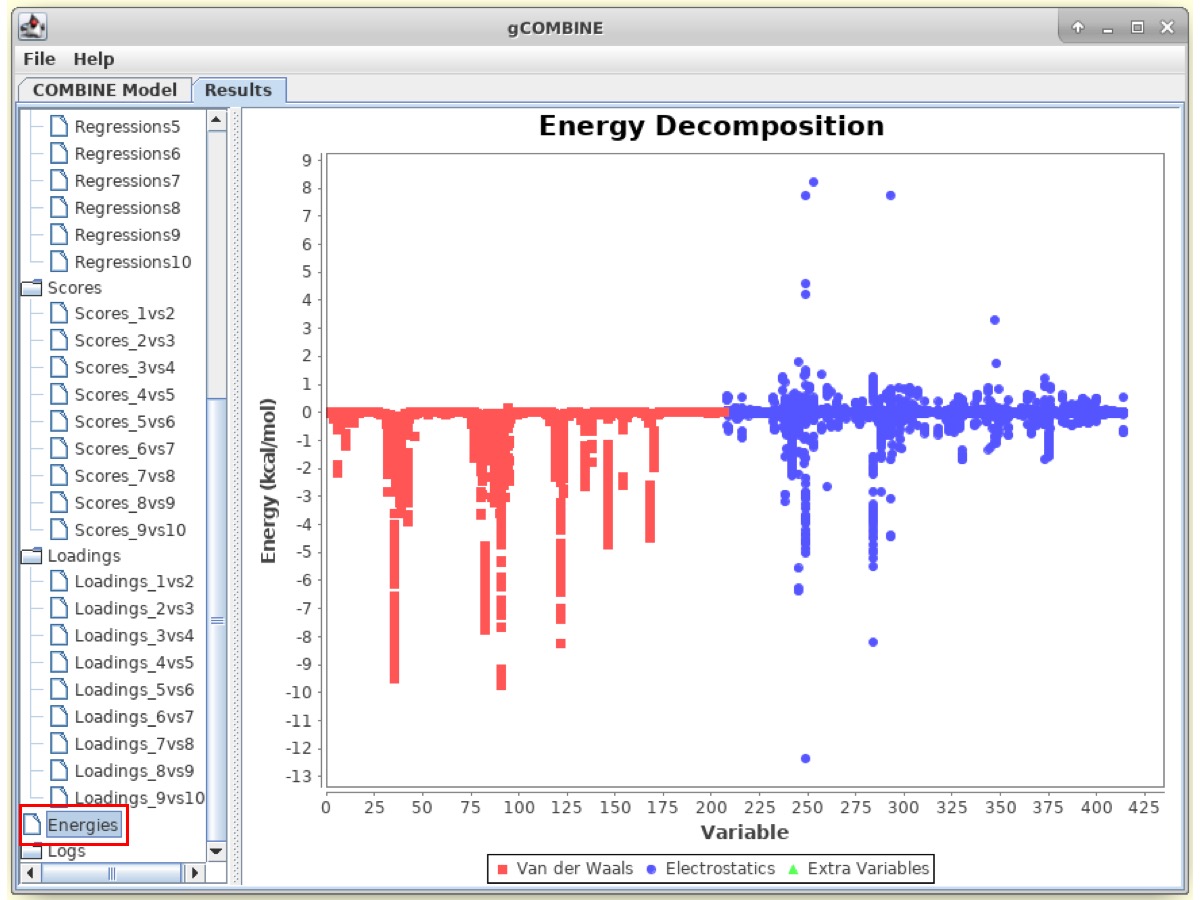 Observe the correlation coefficients for regression (R2) and cross-validation (Q2) and errors between predicted and experimental values on the training and test datasets.

Try to change the type of Cross-validation in the COMBINE Model window to Leave 2 out or Leave 3 out and rerun the COMBINE analysis. Observe how the Q2 values change for different numbers of latent variables and check the robustness of the model.